Go to the nba2k21mt.com website, find the NBA 2K22 Locker Codes column on the homepage, which has updated the latest locker code: HUNT-4-GLORY-CAMO-THE-WORM, get it before 02-01-2022, there will be a Chance to get Hunt 4 Glory: Camouflage Pack, Glass Cleaner Badge Pack or Rebounding Diamond Shoe Boost Pack, if lucky enough, the team will get a new batch of players, the highest value among them is GO Dennis Rodman, if in the previous NBA Missed him in the 75th Anniversary pack, hope you get it in Hunt 4 Glory. 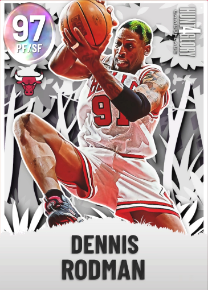 Given Dennis Rodman's performance in the league, I believe that many players are willing to let him join their teams. It was precisely because of Dennis Rodman's joining that the Bulls could focus on the offensive end, and Dennis Rodman was in most of the He did not betray the trust of his teammates within time and performed his defensive duties well. In the Galaxy Opal card released this time, Dennis Rodman's Defense reached 99, and he also has 20 Defensive Badges, of which 15 are purple badges, which makes his defense more perfect.

There are two Personality Badges. In addition to the Enforcer, there is also an Expressive, which is very consistent with Dennis Rodman's style of doing things. He is a person full of personality and expressiveness, whether on the field or in life. Back then, I asked the team owner Jordan for leave to go out to play, but he was so happy that he forgot to return to the team overdue, but Jordan personally brought him back to participate in the game.