Recently, NBA2K21MT released the ranking of NBA players' three-point shooting ability in the NBA 2K21 game. The top two players on this list are undoubtedly the Warriors' splash brothers Curry Thompson combination. Among them, Curry's three-point ability in NBA 2K21 is as high as 99 points, and the scoring data is entirely self-contained, far away from other active three-pointers in the league. As for Thompson, who ranked second, he has a three-point ability of 95 points. Although the ability value is lower than his teammate Curry, he is also a well-deserved top 2 level in the NBA. 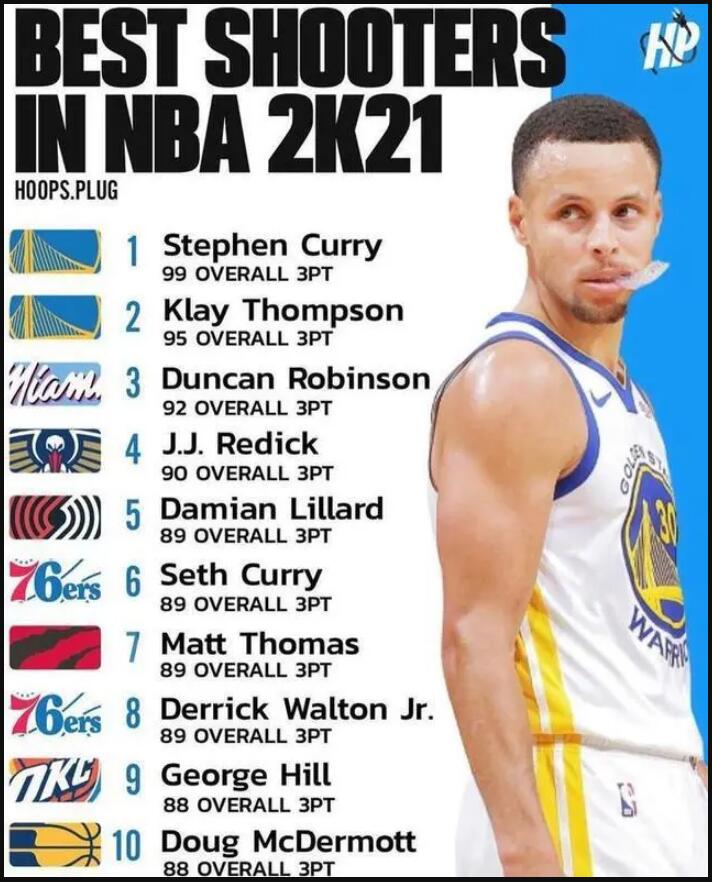 The following players on the list are Lillard, Seth Curry, Matt Thomas, and Derek Wharton Jr. These four NBA players all have 89 three-pointers. The fans here are undoubtedly the trailblazer star Lillard. As the league's top guard star, Lillard's ultra-long three-pointer is a must in the company. Besides, Curry is also well-known on the list, and his ability to value and Lillard are equal. I have to say that the Curry family does have extraordinary talent potential in three-pointers.

The 9th place on the final list is George Hill of the Thunder, and the 10th is McDermott, who played for the Pacers. During the Bucks last season, George Hill's NBA three-pointer data is also remarkable, and his regular-season three-pointers even reached 46%. McDermott averaged 10.3 points, 2.5 rebounds, and 1.1 assists in the 19-20 season, and his three-point shooting percentage were 44%. He is also an extremely efficient three-point shooter! In the NBA 2K21 MT mode, players will compete with other players in 3V3. At present, some of the 3V3 Challenge missions have also been announced. Please see the list of online 3V3 tasks in the NBA 2K21 MT mode shared by NBA2K21MT below. I hope to provide some help to all players. NBA 2K21 will be launch on November 10th for Microsoft Xbox Series X/ S consoles, and on November 12th for PS5. All my TEAM points, tokens, cards, and progress can be transferred to the next generation version, and VC credits are retained.