NBA 2K21 players may have some impressions of Taylor Hilo, the 13th overall pick by the Heat. In the 2020 NBA Finals, Hilo lost to the Lakers and regretted losing the championship, but relying on his outstanding performance. The audience left a profound impression. Please see the introduction of the NBA 2K21 Amethyst Tyler Herro player card shared by NBA2K21MT below, hoping to bring some help to all players.


NO.1 Player profile-Tyler Hiro
When I first heard Shiro's name, I always thought it was Cristiano Ronaldo who played football, but as long as you watched the Heat’s performance in the playoffs last season, you will never engage them again. Mixed up. Because as a league rookie, Shiro has shocked everyone's jaw, he is like Mitsui Kotobuki who came out of "Slam Dunk," destroying the opponent's defense and psychology with one three-pointer after another, and Prove once again: The shooting guard with the No. 13 pick is not a mortal!

Height and weight: 198CM/87KG/190CM wingspan
Competent position: SG/SF
Player source: FLASH4 card pack
Attribute highlights: 94 three points +80 sudden buckle +79 strength
Attribute weakness: 69 steals
Drill shoe suggestion: Hiero can wear Nike brand, first choice speed or transportation speed, second choice sudden button, finally choice defense, anyway, 94 three-pointers are no longer necessary.
Attribute comments: If you look at this Shiro by the shooter's standards, he does not have apparent shortcomings in attributes, but his insufficient defensive characteristics make it difficult to call him an excellent 3D, but not uncommon. The ability to shoot and dunk gives Hill several more options on the offensive end, and his 79 power is enough to reflect his uncompromising performance in the Heat. 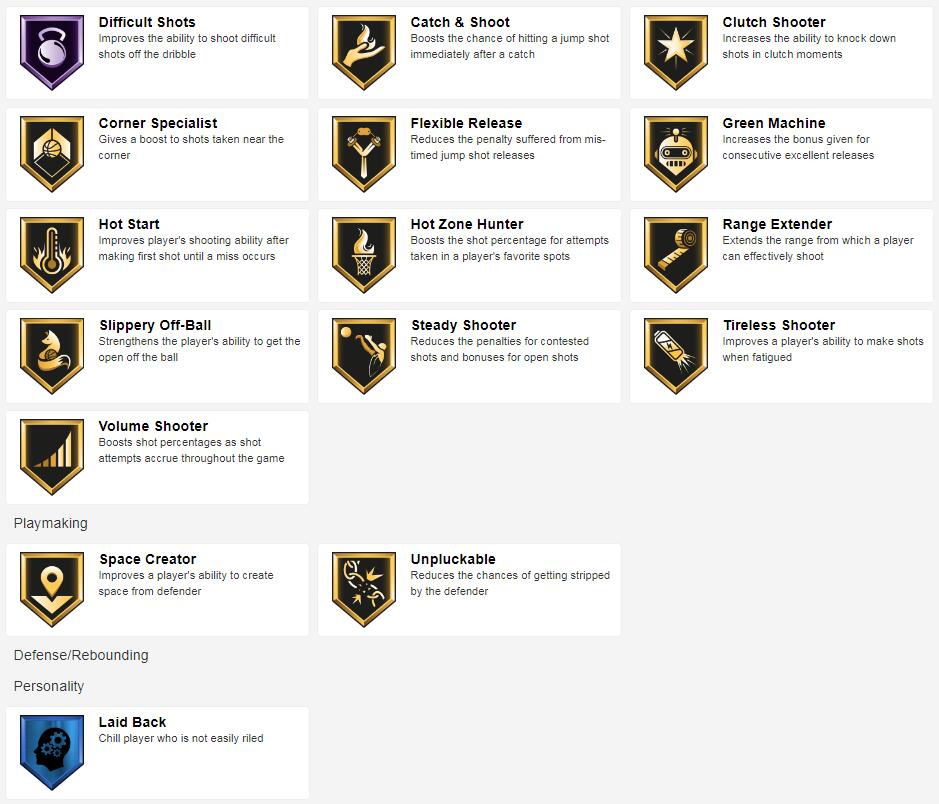 Number of badges: 14 gold and one purple
Highlights of the badge: difficult shots, catch shots, hot spot hunters, long-range turrets
Upgrade suggestions: first step master, stuntman, powerful terminator, dodge terminator, death coil
Badge Comments: Shiro's badges are "partial" and are focused on the projection part, so it is recommended to add some badges such as termination, defense, and the first step to enhance its comprehensiveness.


NO.4 Modeling analysis
Hilo is one of the rare players whose wingspan (190) is shorter than the height (198), but the short wingspan also brings an advantage, that is, the shooting speed will be faster. And in the game, the problem of a short wingspan is not apparent. 1.98 is considered the standard height of a shooting guard, and the overall modeling is entirely satisfactory.

Hill's professional dribble is not nasty, and he can do back dribbles. Slam dunks are pretty good and expected for shooters.

The same is true when he is interfered with (34%). There are indeed problems with 2K's interference judgment this year. Many balls can be green when placed on the face.

Step back and continue to advance against the interference, the green that can't stop

Turn on the shooting master and throw it casually.

Unluckily sway out of the space and directly pull him green!

NO.7 Actual combat: other

Hiro can often trigger this handsome pull-rod layup, which may be limited to the next generation.

Cut in and dunk quickly.

Although Shiro's defensive attributes are average, he has a high defensive enthusiasm, and there are often moments when he rushes for rebounds or chases caps.

In general, when the 2K21 three-point shooting rate itself is ridiculous, Hiro is undoubtedly an elite shooter like "the darling of the version," and his abilities are not too bad. It is quite A comprehensive outside killer. Besides, the price of purple cards is generally low. With a small MT, you can get a player that allows you to enter the green ocean, which is also entirely worth it.