How difficult is NBA2k21? Lillard can't score goals. The game designer teaches everyone to play the game

Compared with other types of games, sports competitive games, apart from the dramatic improvement of the screen effect and feel in a particular generation, it is often difficult for the creators to make too many gameplay and technical innovations every year. This has led to many times such New Year games, which will make players feel aesthetic fatigue.

Every year, the NBA2k series, released in September, was affected by the epidemic this year, but there was no ticket skipping. NBA2k21 arrived as scheduled on September 4. Perhaps the players always complained about nothing new and inspired the fighting spirit of the creators. This time the shooting bar setting has significantly been changed compared with previous works.

In short, it is much harder than before. "Shooting bar is too difficult" has become the main topic of discussion among players in the past two days.

This is indeed the case, and it is a common phenomenon not to score a goal. Trailblazer Lillard, who is on the cover of NBA2k21, also complained about the uncomfortable shooting strip after the game was released:

"I can't stand the new shots ("NBA 2K21") alone? I can't even make free throws."
For a while, the players' voice was even higher, and the official 2K game had to come forward to speak out. Mike Wang, the game director of NBA 2K21, spoke as a representative and shared some personal experiences:


First of all, everyone must be patient. Only after a long time of adaptation and practice can you master the green (perfect) shot timing.
You can close the shot bar and control the timing of the shot through the joystick.

However, the shooting bar's purpose is to reduce the difficulty of the game and help players determine when to let the ball out of hand. Now you tell me that I should follow the feeling?

In the end, 2k officials did not resist the pressure, and subsequently fixed the shooting problems of rookie, professional, and All-Star difficulty in the game. However, the players' feedback has not changed, and the actual effect is still not satisfactory. Now that the evaluation of NBA2k21 on Steam is below the pass line as always, it is challenging to link sports competitive games with the title of high-quality games.

The previous "Madden NFL 21" released by EA was too low in quality and got an ultra-low score of 0.2 on Metacritic. Not only are the various bugs and mold-piercings in the game seriously affecting the game experience of players, but the more outrageous point is also that the stickers in many places show the 19 and 20 years of the logo. 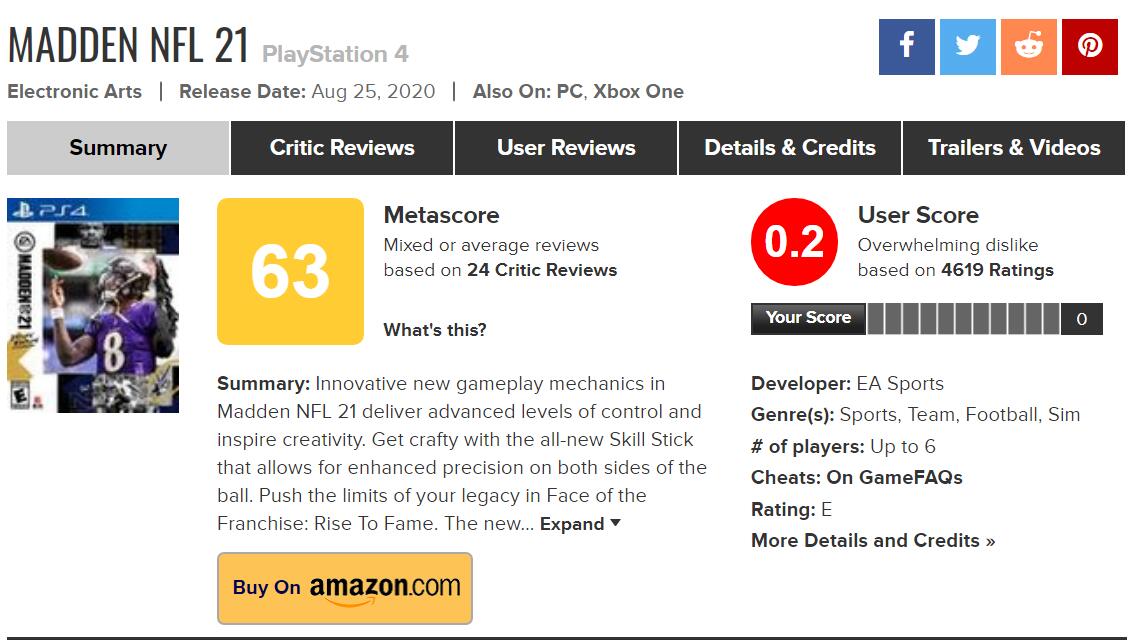 The skin-changing game was originally just an adjective used by players to ridicule, but everyone discovered that these are true!

We can only say, "There is no hate for no reason and love for no reason." If a game wants to reap the players' praise truly, the creators must put enough effort into it and learn to look at problems from the players' perspective. Everyone knows the truth, but not many people can implement it to the end, which is one of the fundamental reasons why good games are rare. With NBA 2K21, 2K has also taken a big step: the game is priced at $70, which is $10 higher than the previous price, Let's take a look at the pros and cons of the next-generation version of NBA 2K21 Options and Modes.